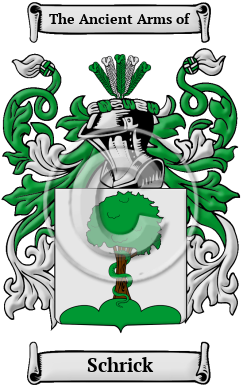 Early Origins of the Schrick family

The surname Schrick was first found in Austria, where the name Schrick became noted for its many branches in the region, each house acquiring a status and influence which was envied by the princes of the region. In later years, bearers of the name became a power unto themselves and were elevated to the ranks of nobility as they grew into this most influential family. The name Schrick comes from the Middle High German word "schrecken," which means "to leap" or "spring," though it carries the connotation of jumping due to being startled or frightened. Like many surnames, the name probably began as a nickname; perhaps the original bearer of the name was talented at leaping or perhaps he was timid and easily startled or frightened. The nickname stuck, and eventually the person took it as his surname.

Early History of the Schrick family

This web page shows only a small excerpt of our Schrick research. Another 68 words (5 lines of text) are included under the topic Early Schrick History in all our PDF Extended History products and printed products wherever possible.

Spelling variations of this family name include: Schreck, Schrock, Schrockhaas and others.

More information is included under the topic Early Schrick Notables in all our PDF Extended History products and printed products wherever possible.

Schrick migration to the United States +

Schrick Settlers in United States in the 17th Century

Schrick Settlers in United States in the 18th Century