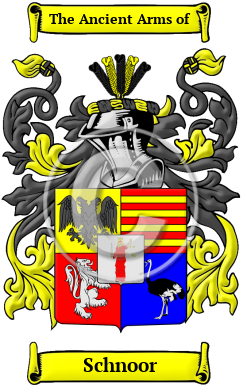 The Schnoor surname may be derived from the German word "Schnur," meaning "string." It is supposed that the name was originally occupational for someone who either made string, or made objects using string. However, the name may also have derived from the German "schnurr," which means "funny," or "amusing," and in this case, would likely have been a nickname, which later became a surname.

Early Origins of the Schnoor family

The surname Schnoor was first found in Mergentheim, in present day, Baden-Württemberg, where there was reference to a Rüdiger Snurre of Igersheim in 1298. Other records include Johann Snorre recorded as living in Rostock in 1304; and Hainlin Schnurrer, citizen of Stuttgart, on record in 1404.

Early History of the Schnoor family

This web page shows only a small excerpt of our Schnoor research. Another 39 words (3 lines of text) covering the years 1687, 1794, 1832, 1872, and 1873 are included under the topic Early Schnoor History in all our PDF Extended History products and printed products wherever possible.

Notables with the surname Schnoor during this period were a bearer of Schnorr, raised to the nobility of the Holy Roman Empire on April 4, 1687. The family was also later ennobled in Bavaria on May 7, 1832 and in Saxony...
Another 40 words (3 lines of text) are included under the topic Early Schnoor Notables in all our PDF Extended History products and printed products wherever possible.

Schnoor migration to the United States +

Schnoor Settlers in United States in the 18th Century

Schnoor Settlers in United States in the 19th Century

Schnoor Settlers in United States in the 20th Century