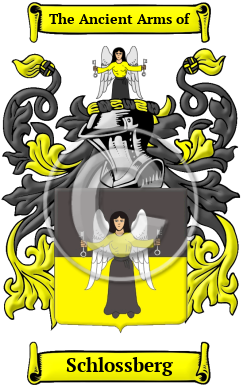 Early Origins of the Schlossberg family

The surname Schlossberg was first found in Bavaria, where the name was closely identified in early medieval times with the feudal society which would become prominent throughout European history. Bearers of the name would later emerge as a noble family with great influence, having many distinguished branches, and become noted for their involvement in social, economic and political affairs. The German word "schloss" has two meanings, "castle" and "lock," which lead to two possible origins for the name; it might refer to one who lived near a castle, or it may have been an occupational name, being given to a locksmith. The latter origin is by far the most likely for the Schlosser and Schlossmacher forms of the name, whereas the origin of Schloss could be either.

Early History of the Schlossberg family

This web page shows only a small excerpt of our Schlossberg research. Another 93 words (7 lines of text) covering the year 1368 is included under the topic Early Schlossberg History in all our PDF Extended History products and printed products wherever possible.

Spelling variations of this family name include: Schloss, Schlosser, Schlossmann, Schlossmacher and others.

More information is included under the topic Early Schlossberg Notables in all our PDF Extended History products and printed products wherever possible.

Migration of the Schlossberg family

Some of the first settlers of this family name or some of its variants were: Leonard Schlosser, who came to Pennsylvania in 1732; Jonah Schloss, who arrived in Indiana in 1876 and Michael Schlossmacher, who settled in North America in 1783..