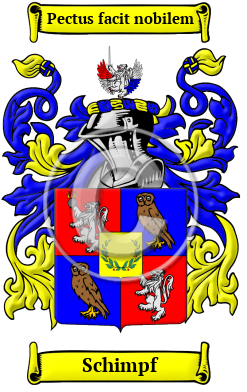 The roots of the distinguished German surname Schimpf lie in North Germany. The name is derived from the Middle High German word "schimpf," meaning "joke" or "play." It is likely that the name was first bestowed on someone who was given to joking and playing tricks as a nickname, eventually becoming a hereditary surname.

Early Origins of the Schimpf family

The surname Schimpf was first found in the Oberrheins region, where the name is thought to have first emerged. The earliest known bearer of the name was Wernher Schimpf, who was a sexton in Neuenburg in 1371. The young Schimpf family played a crucial role in the development of the medieval society of the region. In later years, the name branched into many houses, each playing a significant role in the local social and political affairs.

Early History of the Schimpf family

Spelling variations of this family name include: Schimpf, Schimpff, Schempf, Schempff, Schimpfle and many more.

Another 26 words (2 lines of text) are included under the topic Early Schimpf Notables in all our PDF Extended History products and printed products wherever possible.

Schimpf migration to the United States +

Schimpf Settlers in United States in the 18th Century

Schimpf Settlers in United States in the 19th Century

Schimpf Settlers in United States in the 20th Century