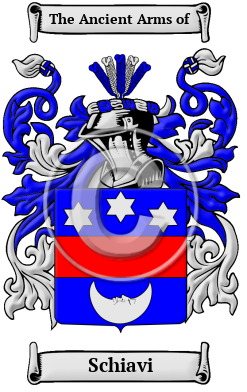 Early Origins of the Schiavi family

The surname Schiavi was first found in Cesena, a town in the Emilia-Romagna region at the foot of the Apennines, crowned with the ancient fortress of Rocca. In 1357 it was defended against Albornez, in 1377 sacked by Cardinal Robert of Geneva and in 1465 came under the domination of the Church. Pius VI and Pius VII were both born here. In those ancient times only persons of rank, the podesta, clergy, city officials, army officers, artists, landowners were entered into the records. To be recorded at this time, at the beginning of recorded history, was of itself a great distinction and indicative of noble ancestry.

Early History of the Schiavi family

This web page shows only a small excerpt of our Schiavi research. Another 112 words (8 lines of text) covering the years 1397 and 1478 are included under the topic Early Schiavi History in all our PDF Extended History products and printed products wherever possible.

More information is included under the topic Early Schiavi Notables in all our PDF Extended History products and printed products wherever possible.

Migration of the Schiavi family

Some of the first settlers of this family name or some of its variants were: Guy Sciavoni, who was recorded as one of the early Italian Immigrants to Seneca Fall, New York between the years 1884-1915; and V. Schiavone, who arrived in New York aboard the S.S. Anglia in 1891..