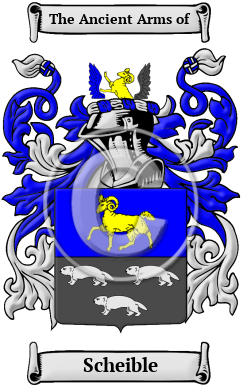 Early Origins of the Scheible family

The surname Scheible was first found in northern Germany, where the name emerged in mediaeval times as one of the notable families of the region. From the 13th century on the surname was identified with the great social and economic evolution which made this territory a landmark contributor to the five hundred-year process of developing the German nation. Chronicles first mention descendents of the northern German families who early on moved deep into the south. Listed are Hainrich "aus der Scheiben" of Tirol in 1369, Hensel Scheybel in 1379, and E. Schyblin of Wuerttemberg in 1450.

Early History of the Scheible family

This web page shows only a small excerpt of our Scheible research. Another 105 words (8 lines of text) covering the years 1781, 1794, and 1798 are included under the topic Early Scheible History in all our PDF Extended History products and printed products wherever possible.

Spelling variations of this family name include: Scheibler, Scheiber, Scheybe, Scheibe, Scheyber, Schiber and many more.

Notable figures of the time with the name Scheible were Carl Friedrich Scheibler, who was the son of the famous Prussian doctor and professor of natural history in Stargard. Carl Friedrich was a priest...
Another 34 words (2 lines of text) are included under the topic Early Scheible Notables in all our PDF Extended History products and printed products wherever possible.

Scheible migration to the United States +

Scheible Settlers in United States in the 18th Century

Scheible Settlers in United States in the 19th Century