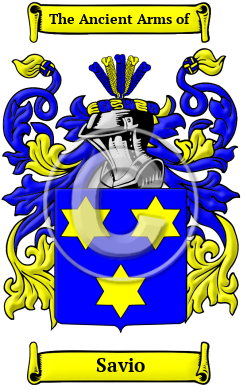 The Italian surname Savio derives from the word "savio," meaning "wise," or "learned;" thus it was likely originally a nickname for a wise or knowledgeable man.

Early Origins of the Savio family

The surname Savio was first found in Venice, a city and seaport occupying one of the most remarkable sites of the world. It is rich in ancient palaces, churches, libraries, galleries, monuments, statues, treasures and artifacts. Its history is abundant in politics, art, religion, scholarship and conflict. An early record of this name shows that Ziliolo de Savina held the post of ducal secretary in Venice, in 1289. Another record shows the noble Savini di Siena family is on record holding lands in Sienna as early as 1355. To be recorded at this time, at the beginning of recorded history, was of itself a great distinction and indicative of noble ancestry.

Early History of the Savio family

This web page shows only a small excerpt of our Savio research. Another 97 words (7 lines of text) covering the years 1627, 1862, 1796, 1639 and 1677 are included under the topic Early Savio History in all our PDF Extended History products and printed products wherever possible.

Another 28 words (2 lines of text) are included under the topic Early Savio Notables in all our PDF Extended History products and printed products wherever possible.

Savio migration to the United States +

Savio Settlers in United States in the 19th Century

Savio Settlers in United States in the 20th Century