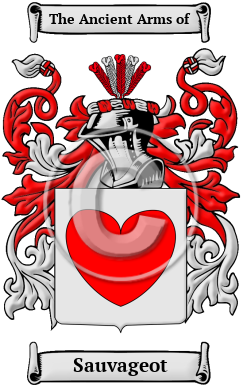 The name Sauvageot evolved in the French province of Champagne in the Middle Ages. It was a name for a person who is considered to be unmannered or coarse. Originally the name Sauvageot was from the Old French word "sauvage," meaning "savage."

Early Origins of the Sauvageot family

The surname Sauvageot was first found in Champagne, where the family was established in a village in the department of Haute-Marne, in the district of Wassy.

Several members of this distinguished family became renowned. Denis Sauvage, lord of Parc, was born around 1520 in Fontenailles. He was a writer and died around 1587. He is credited with some grammatical observations and translations. François-Clément Sauvage, an engineer and administrator, was born in 1814 and died in Paris in 1872.

Early History of the Sauvageot family

This web page shows only a small excerpt of our Sauvageot research. Another 37 words (3 lines of text) covering the years 1706, 1767, 1786, 1857, 1794 and 1877 are included under the topic Early Sauvageot History in all our PDF Extended History products and printed products wherever possible.

Notable amongst the family during this period was François Sauvages de la Croix (1706-1767), a physician and botanist, the son of a former captain in the regiment of Flanders...
Another 28 words (2 lines of text) are included under the topic Early Sauvageot Notables in all our PDF Extended History products and printed products wherever possible.

Migration of the Sauvageot family