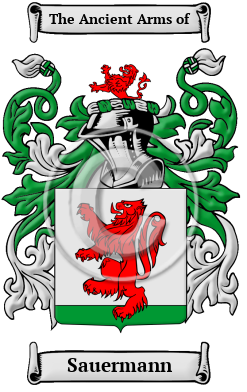 Early Origins of the Sauermann family

The surname Sauermann was first found in Austria, where the name was an integral part of the feudal society which would shape modern European history. Many prominent branches of the family would strive to make this name renowned as they contributed to the social, economic and political affairs of the region. The family, which originated from the Sau river region, became prominent in local affairs in the Krain, Carinthian, and Styrian regions. Dieteri Galleri was the first to take on this name, and according to chronicles, appeared under the name Caspar Sauer as early as 1313. They branched into many cadet houses which played important roles in the national conflicts, as each group sought power and status in an ever changing territorial profile.

Early History of the Sauermann family

This web page shows only a small excerpt of our Sauermann research. Another 98 words (7 lines of text) covering the years 1556, 1630, 1648, and 1668 are included under the topic Early Sauermann History in all our PDF Extended History products and printed products wherever possible.

During this period prominent bearers of the name Sauermann were Georg Sauer von Kosiach, who became in 1556 the general of the Croatian border and commander of Carlstadt. His brother was a general...
Another 32 words (2 lines of text) are included under the topic Early Sauermann Notables in all our PDF Extended History products and printed products wherever possible.

Sauermann migration to the United States +

Sauermann Settlers in United States in the 18th Century