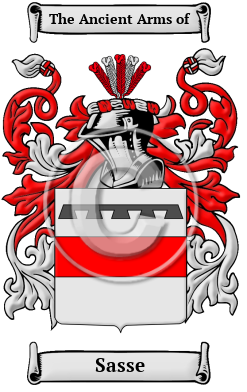 The name Sasse comes from the German region of Westphalia. The tradition of adopting hereditary surnames came to Germany after the 12th century, and the names of places where people lived were a primary source. Many local names carry the prefix "von", meaning "of" or "from". It originally indicated land ownership, and is sometimes a mark of nobility. The Sasse family originally lived in Saxony. The original bearer of the name Sasse was a person that was born or that had lived in the region of Lower (northern) Saxony, which is essentially the modern German state named Saxony. This name would have been given to the original bearer of the name after they had migrated from Lower Saxony to another region of Germany, namely Westphalia. The Saxons, who were a Germanic tribe, dwelled in northern Germany and along the Baltic coast during the Roman era. After the fall of the Roman Empire, the Saxons migrated south and west. By the 5th century, the Saxon and Angle tribes held most of England. The Saxon language became one of the precursors of the English language.

Early Origins of the Sasse family

The surname Sasse was first found in Westphalia, where this family name became a prominent contributor to the development of the district from ancient times. Always prominent in social affairs, the name became an integral part of that turbulent region as it emerged to form alliances with other families within the Feudal System and the nation.

Early History of the Sasse family

This web page shows only a small excerpt of our Sasse research. Another 142 words (10 lines of text) covering the years 1779 and 1814 are included under the topic Early Sasse History in all our PDF Extended History products and printed products wherever possible.

In the medieval era, many different cultural groups lived in the German states. There are thus many regional variations of German surnames from that era. Westphalians spoke Low German, which is similar to modern Dutch. Many German names carry suffixes that identify where they came from. Others have phrases attached that identify something about the original bearer. Other variations in German names resulted from the fact that medieval scribes worked without the aid of any spelling rules. The spelling variations of the name Sasse include Sasse, Sass, Sasser, Sase, Saser, Sassen, Sasen, Zasse, Zasser and many more.

Another 29 words (2 lines of text) are included under the topic Early Sasse Notables in all our PDF Extended History products and printed products wherever possible.

In the United States, the name Sasse is the 16,012nd most popular surname with an estimated 2,487 people with that name. [1]

Sasse migration to the United States +

Sasse Settlers in United States in the 18th Century

Sasse Settlers in United States in the 19th Century

Sasse Settlers in Canada in the 18th Century