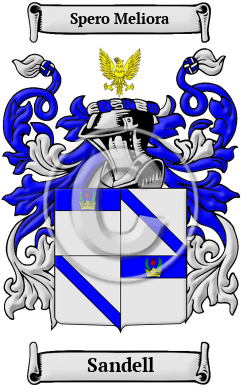 Early Origins of the Sandell family

The surname Sandell was first found in the Upper Ward of Clydesdale and were from the lands of Sandliands. These were lands that were traditionally held by the Douglasses in the early 14th century, hence their relationship as sept of the Clan Douglas. James Sandilands, armiger, was a vassal of William, the 1st Earl of Douglas and obtained a grant of lands in Peeblesshire from David II in 1336. In 1348 he became possessor of the lands of Sandilands and Redmyre by charter from William, lord of Douglas. [1]

Early History of the Sandell family

Notable amongst the family at this time was James Sandilands first Lord Torphichen (d. 1579), second son of Sir James Sandilands of Calder; James Sandilands (1511-1596), Hospitaller Order of St John of Jerusalem, of Rhodes, and...
Another 36 words (3 lines of text) are included under the topic Early Sandell Notables in all our PDF Extended History products and printed products wherever possible.

In the United States, the name Sandell is the 13,658th most popular surname with an estimated 2,487 people with that name. [3]

Sandell migration to the United States +

Sandell Settlers in United States in the 19th Century

Sandell Settlers in Australia in the 19th Century