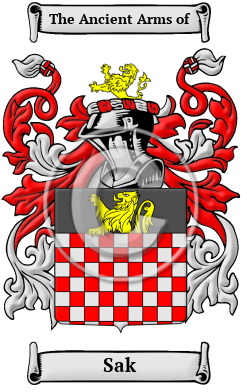 Early Origins of the Sak family

The surname Sak was first found in Austria, where this family name became a prominent contributor to the development of the district from ancient times. Always prominent in social affairs, the name Zach became an integral part of that turbulent region as it emerged to form alliances with other families within the Feudal System and the nation.

Early History of the Sak family

This web page shows only a small excerpt of our Sak research. Another 103 words (7 lines of text) covering the years 1765, 1801, 1649, 1712, 1679 and 1705 are included under the topic Early Sak History in all our PDF Extended History products and printed products wherever possible.

During this period prominent bearers of the name Sak were Johann Michael Zächer (1649-1712), an Austrian composer, born in Vienna. He was Domkapellmeister of St. Stephen's...
Another 26 words (2 lines of text) are included under the topic Early Sak Notables in all our PDF Extended History products and printed products wherever possible.

Migration of the Sak family

Some of the first settlers of this family name or some of its variants were: Jacob Zech, who came to Pennsylvania in 1751; Conrad Zech settled in Texas in 1846; Joseph Zach came with his family to Texas in 1854; Edward Zach came to Philadelphia in 1877.