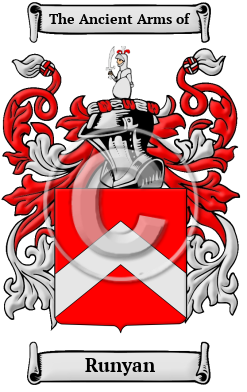 The Runyan surname is an Anglicization of the French name Rongnon.

Early Origins of the Runyan family

The surname Runyan was first found in on the island of Jersey, where an exile from Poitiers, France, made a brief stop on his way to America. It is unclear whether other Huguenots of this name settled in parts of England.

Early History of the Runyan family

This web page shows only a small excerpt of our Runyan research. More information is included under the topic Early Runyan History in all our PDF Extended History products and printed products wherever possible.

Spelling variations of this family name include: Runyon, Runyan, Runyun, Runion, Rongnion, Runnion and others.

Another 42 words (3 lines of text) are included under the topic Early Runyan Notables in all our PDF Extended History products and printed products wherever possible.

In the United States, the name Runyan is the 4,352nd most popular surname with an estimated 7,461 people with that name. [1]

Runyan migration to the United States +

Runyan Settlers in United States in the 17th Century

Runyan Settlers in United States in the 19th Century

Runyan Settlers in United States in the 20th Century

Suggested Readings for the name Runyan +