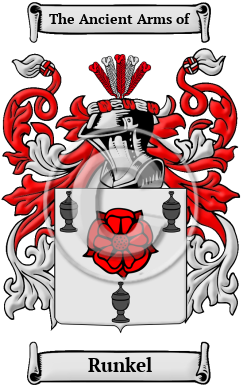 Early Origins of the Runkel family

The surname Runkel was first found in Lancashire. One of the first records of the family was found in the year 1246 when Alan de Runacres held estates in that shire. "The Renacres family have been mentioned; they appear to have been closely related to the lords of the manor [of Bickerstaffe], and on one occasion 'put in their claim' at a settlement of the family estates. From cases cited above it appears that Stephen de Renacres was a prominent personage in Bickerstaffe about 1290, and that he was succeeded by his son Simon, who occurs in the reign of Edward II. In 1348 Richard, son of Simon de Renacres, granted to his father a rent of 2s. 4d. issuing from lands in Bickerstaffe, and in 1391-2 Ellen (Walsh), the widow of Richard de Renacres of Bickerstaffe, granted to Hugh le Spencer of Ormskirk certain lands which had come to her after the death of her husband." [1]

Early History of the Runkel family

This web page shows only a small excerpt of our Runkel research. Another 80 words (6 lines of text) covering the years 1455 and 1487 are included under the topic Early Runkel History in all our PDF Extended History products and printed products wherever possible.

More information is included under the topic Early Runkel Notables in all our PDF Extended History products and printed products wherever possible.

Runkel migration to the United States +

Runkel Settlers in United States in the 18th Century

Runkel Settlers in United States in the 19th Century