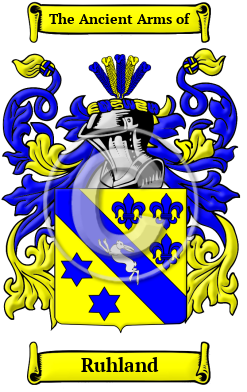 The German surname Ruhland emerged in the lands that formed the modern state of Lower Saxony, which is presently bordered by the North Sea, the Hartz mountains and the Elbe and Ems rivers.German surnames developed at a time when most of Lower Saxony, and most of the German provinces, were states of the Holy Roman Empire. At first people used only a single name, but as the population grew and people began to travel, they began to find it necessary to take on an additional name to more clearly identify themselves. Fairly general principles guided the development of hereditary surnames in Lower Saxony. Two of the common types of family names found in Prussia are patronymic surnames, which are derived from the father's given name, and metronymic surnames, which are derived from the mother's given name. The surname Ruhland derived from the given name Rudolf. The name Ruehle was adopted by a town near Meppen and Holzmunden in East Friesland near the Dutch border.

Early Origins of the Ruhland family

The surname Ruhland was first found in East Friesland, where the name was anciently associated with the tribal conflicts of the area. They declared allegiances to many nobles and princes of early history, lending their influence in struggles for power and status within the region. They branched into many houses, and their contributions were sought by many leaders in their search for power. The name is thought to have originated as a short form of Rudolf. A town near Meppen and Holzmunden in East Friesland took on the name Ruehle, and this region near the Dutch border is probably the place of origin for many of the branches bearing this name.

Early History of the Ruhland family

This web page shows only a small excerpt of our Ruhland research. Another 100 words (7 lines of text) covering the years 1743, 1789, 1761, 1789 and 1847 are included under the topic Early Ruhland History in all our PDF Extended History products and printed products wherever possible.

Notables of the time included Jacob Ruehle, the father of the above mention brothers Johann and Georg, who was a Doctor of Law and mayor of the city Koenigsberg in East Prussia. Other prominent descendents of this line include Jacob Heinrich Ruehle (d.1789) who became a Senator of Frankfurt...
Another 49 words (4 lines of text) are included under the topic Early Ruhland Notables in all our PDF Extended History products and printed products wherever possible.

In the United States, the name Ruhland is the 17,161st most popular surname with an estimated 2,487 people with that name. [1]

Ruhland migration to the United States +

Ruhland Settlers in United States in the 19th Century