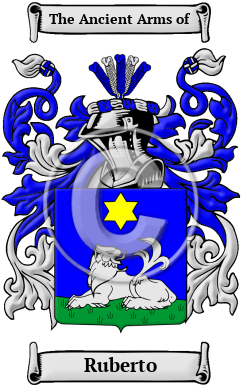 Early Origins of the Ruberto family

The surname Ruberto was first found in Piacenza, sometime during the 17th century, though the Ruberto name is found all over Italy. The variations ending in "i" are mostly from the north, whereas those that end in "o" originate in the south. The name Ruberto, like many surnames originated as a personal name; it shares the same origin as the English name "Robert," coming from the German first name Hrodebert, which is composed of the elements "hrod" and "berht," meaning "fame" and "bright."

Early History of the Ruberto family

This web page shows only a small excerpt of our Ruberto research. Another 35 words (2 lines of text) are included under the topic Early Ruberto History in all our PDF Extended History products and printed products wherever possible.

Spelling variations of this family name include: Roberto, Roberti, Robertis, Ruberti, Ruberto and many more.

Another 39 words (3 lines of text) are included under the topic Early Ruberto Notables in all our PDF Extended History products and printed products wherever possible.

Ruberto migration to the United States +

Ruberto Settlers in United States in the 19th Century