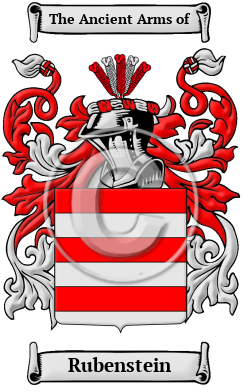 The ancestral home of the Rubenstein family was in the German state of Bavaria. Rubenstein is a local name for a person who lived in Bavaria, where the family gained a significant reputation for its contributions to the emerging medieval society.

Early Origins of the Rubenstein family

The surname Rubenstein was first found in Bavaria, where the family gained a significant reputation for its contributions to the emerging mediaeval society. The name became prominent as many branches of the family founded separate houses and acquired estates in various regions, always elevating their social status by their great contributions to society. In the Middle Ages, the word "Rubin" referred to a type of gem. Individual bearers of the name first mentioned in ancient chronicles include Richter Rubynus of Bruenn in 1240 and Nicolas Rubein (Rubin) of Munich in 1343. Also, a popular medieval minstrel of Tyrol bore the name Rubin. He was of the minor nobility, had his home in Merano, wrote 22 songs, and participated in the crusade of 1228.

Early History of the Rubenstein family

This web page shows only a small excerpt of our Rubenstein research. Another 166 words (12 lines of text) covering the years 1752 and 1760 are included under the topic Early Rubenstein History in all our PDF Extended History products and printed products wherever possible.

In the medieval era, many different cultural groups lived in the German states. There are thus many regional variations of German surnames from that era. Westphalians spoke Low German, which is similar to modern Dutch. Many German names carry suffixes that identify where they came from. Others have phrases attached that identify something about the original bearer. Other variations in German names resulted from the fact that medieval scribes worked without the aid of any spelling rules. The spelling variations of the name Rubenstein include Rubin, Rubein, Rubinus, Ruben, Ruebin, Rubinich, Rubinig, Rubinick and many more.

More information is included under the topic Early Rubenstein Notables in all our PDF Extended History products and printed products wherever possible.

In the United States, the name Rubenstein is the 8,888th most popular surname with an estimated 2,487 people with that name. [1]

Rubenstein migration to the United States +

Between the mid-17th and mid-20th centuries, German settlers arrived in North America by the thousands. Persecution based on religion and poverty were great motivators in this large-scale migration. So too was the opportunity for tenant farmers to own their own land. Ample land and opportunity awaited the settlers who went to such states as Pennsylvania, Texas, New York, Illinois, and California, as well as Ontario and the prairie provinces of Canada. Research into the origins of individual families in North America revealed records of the immigration of a number of people bearing the name Rubenstein or a variant listed above:

Rubenstein Settlers in United States in the 19th Century

Rubenstein Settlers in United States in the 20th Century