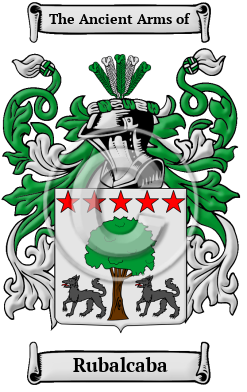 The Spanish surname Rubalcaba is of local origin, being derived from the name of the place of residence of the initial bearer. In this instance, the surname would appear to be derived from a pseudo translation of the Arabic term "Rub al Khali" which means literally "the empty quarter." There is little doubt that this place-name was first introduced into Spain during the Moorish conquest when Tarik the Moorish leader crossed into Gibraltar in the year 711.

Early Origins of the Rubalcaba family

The surname Rubalcaba was first found in the Castilian province of Santander.

Early History of the Rubalcaba family

This web page shows only a small excerpt of our Rubalcaba research. Another 112 words (8 lines of text) covering the year 1878 is included under the topic Early Rubalcaba History in all our PDF Extended History products and printed products wherever possible.

In the United States, the name Rubalcaba is the 15,366th most popular surname with an estimated 2,487 people with that name. [1]

Rubalcaba migration to the United States +

Rubalcaba Settlers in United States in the 20th Century