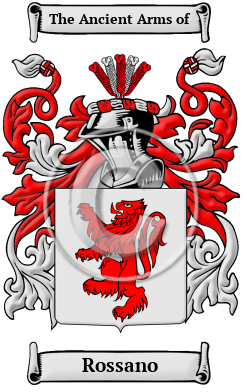 The name Rossano is derived from the Italian word "Rosso," which comes from the Latin words "Rubius and Rossius," which mean "red." As a surname, Rossano was originally a nickname for a person with red hair or a reddish complexion. Nickname surnames usually reflected the physical characteristics or attributes of the first person that used the name. Although the most common type of family name found in Tuscany is the patronymic surname, which is derived from the father's given name, the nickname type of surname is also frequently found.

Early Origins of the Rossano family

The surname Rossano was first found in the cites of Trento, Udine, Vicenza, Venice, Savigliano, Pisa, Ravenna, and Rome. Some of the family migrated as far south as Sicily. This southern branch of the family descended from Count Ugone Rosso of Sicily, whose ancestors were Normans.

Early History of the Rossano family

Italian surnames come in far more variations than the names of most other nationalities. Regional traditions and dialects are a decisive factor in this characteristic. For example, northern names tend to end in "o", while southern in "i". Also important, but not unique to Italy, was the fact that before dictionaries and the printing press most scribes simply spelled words according to their sounds. The predictable result was an enormous number of spelling variations. The recorded spellings of Rossano include Rosso, Rossa, Rossi, Del Rosso, De Rossi, De Russi, Lo Russo, Lorusso, La Russa, Larussa, Rosselli, Rossello, Rossellini, Ruggiu, Ruiu, Ruju, Rubiu, Rossillo, Rossetto, Rossit, Rossini, Rossitti, Rossitto, Rossotto, Russotti, Russello, Russetti, Russino, Russiani, Rossoni, Rossetti, Roussini, Rosselino, Rossato, Della Rossa, DeRossi, De Rubeis, Russo and many more.

Prominent among members of the family was Jacoppi Rossi in 1176, Gherardo Rossi in 1197 and Beringhieri Rossi in 1204; in 1325, Fidello del Rosso was prior at St. Piero; Giambattista Rossi vicar of Ordine in 1564; Lorenzo Rossi, professor of philosophy at the University of Ferrara in the 17th century; Cosimo Rosselli (1439-1507), an Italian painter of the Quattrocento, active mainly in his birthplace of Florence; Michelangelo Rossi (Michel Angelo del Violino) (ca. 1602-1656), an important Italian composer, violinist and organist...
Another 81 words (6 lines of text) are included under the topic Early Rossano Notables in all our PDF Extended History products and printed products wherever possible.

Rossano migration to the United States +

In the immigration and passenger lists a number of early immigrants bearing the name Rossano were found:

Rossano Settlers in United States in the 20th Century