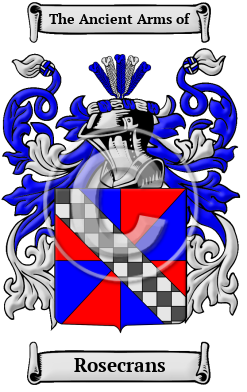 Schleswig-Holstein, which is the northernmost state in western Germany, is the homeland of the proud surname Rosecrans. By and large, hereditary surnames were formed in Germany when areas of Schleswig, and most of the German states, were a part of the Holy Roman Empire. At this time, as the population of Europe swelled and travel became easier, people began to encounter others sharing their own name and they avoided confusion by adopting a second name. Common forms of surnames found in Schleswig are those that are derived from nicknames.

Early Origins of the Rosecrans family

The surname Rosecrans was first found in Schleswig-Holstein, where this family became prominent contributors to the development of the district from ancient times. Always prominent in social affairs, the name became an integral part of that turbulent region as they emerged to form alliances with other families within the Feudal System and the nation. Translated literally, the name means "crown of roses." In the year 1325, Holger Rosenkranz traveled to Rome from Denmark to receive a crown of roses from the pope, which he then incorporated into his coat-of-arms. He was the son of Knight Erich von Rosenkranz, and owned the estates of Bollar in Jutland. He married Margaretha von Flemming, from the nobility of Norway, thus extending the family estates into that country.

Early History of the Rosecrans family

This web page shows only a small excerpt of our Rosecrans research. Another 180 words (13 lines of text) covering the years 1596, 1675, 1676, 1805, and 1879 are included under the topic Early Rosecrans History in all our PDF Extended History products and printed products wherever possible.

More information is included under the topic Early Rosecrans Notables in all our PDF Extended History products and printed products wherever possible.

Rosecrans migration to the United States +

Rosecrans Settlers in United States in the 19th Century