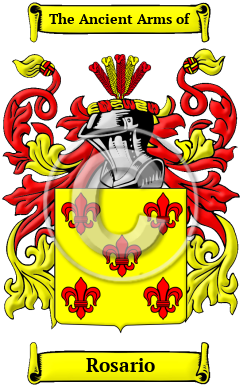 The Spanish surname Rosario is of local origin, being one of those surnames based on the place where original bearers of the name once lived or held land. In this case, the name was originally used to indicate that the bearer was "a native of Rosario." The name is derived from the Latin "rosarium," which literally means "a beautiful garden of roses." Thus, the town of Rosario was named due to its reputation for the beautiful flora that characterizes that area.

Early Origins of the Rosario family

The surname Rosario was first found in the region of Burgos in Old Castille, in northern Spain.

Early History of the Rosario family

This web page shows only a small excerpt of our Rosario research. Another 73 words (5 lines of text) covering the years 1668 and 1742 are included under the topic Early Rosario History in all our PDF Extended History products and printed products wherever possible.

Spelling variations of this family name include: Rosarius, Rosal, Rosa, Rosales, Del Rosario and others.

More information is included under the topic Early Rosario Notables in all our PDF Extended History products and printed products wherever possible.

In the United States, the name Rosario is the 820th most popular surname with an estimated 37,305 people with that name. [1]

Rosario migration to the United States +

Rosario Settlers in United States in the 18th Century

Rosario Settlers in United States in the 19th Century

Rosario Settlers in Australia in the 19th Century