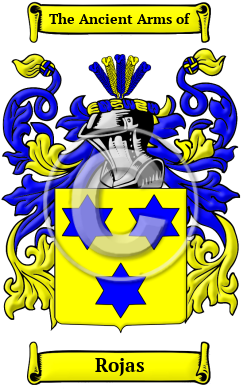 The Rojas surname is derived from the feminine, plural Spanish word "Rojo," which means "red." The name was most likely topographic, first used by someone who lived near some "red earth."

Early Origins of the Rojas family

The surname Rojas was first found in Old Castile in the heart of Spain, where the name is thought to have originated.

Early History of the Rojas family

This web page shows only a small excerpt of our Rojas research. Another 49 words (4 lines of text) covering the years 1688, 1923, 1465 and 1541 are included under the topic Early Rojas History in all our PDF Extended History products and printed products wherever possible.

Spelling variations of this family name include: Rojo, Rojas and others.

Rojas migration to the United States +

Rojas Settlers in United States in the 16th Century

Rojas Settlers in United States in the 18th Century

Rojas Settlers in United States in the 19th Century