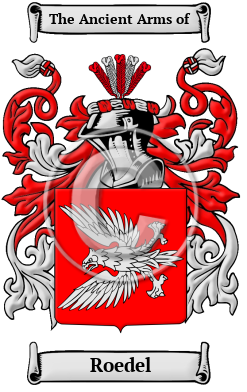 Early Origins of the Roedel family

The surname Roedel was first found in the Rhineland, where the name became noted for its many branches within the region, each house acquiring a status and influence which was envied and enrolled by the princes of the region. The name can be traced back to the mediaeval German word Rod-her, meaning "famous soldier." The family moved north from early on, and chronicles first mention the Pomeranian knight Roderus of Rostock in 1282, Henrich Roder of Rostock in 1299, Nicolaus Roeder of Greifswald in 1385, and Conrad Roederer of Ortenau in 1300. In their later history the family became quite powerful and were elevated to the ranks of nobility.

Early History of the Roedel family

This web page shows only a small excerpt of our Roedel research. Another 268 words (19 lines of text) covering the years 1556, 1754, 1766, and 1835 are included under the topic Early Roedel History in all our PDF Extended History products and printed products wherever possible.

Another 47 words (3 lines of text) are included under the topic Early Roedel Notables in all our PDF Extended History products and printed products wherever possible.

Roedel migration to the United States +

Roedel Settlers in United States in the 18th Century

Roedel Settlers in United States in the 19th Century