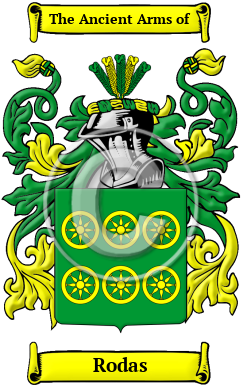 The noble Spanish surname Rodas is toponymic in origin, based on the name of the place where the initial bearer once resided or held land. The surname Rodas is taken directly from the Spanish word "rueda," derived from the Latin "rota," meaning literally "arched wood that forms a bow." The word in Catalan is "roda," also meaning "wheel."

Early Origins of the Rodas family

The surname Rodas was first found in the mountains of Burgos, in the northern regions of the Iberian peninsula. Early records of the name Rodas show that Francisco de Perellos, Carmalengo del Rey, was granted the noble title of Viscount of Rueda by Pedro IV de Aragon in 1366.

Early History of the Rodas family

This web page shows only a small excerpt of our Rodas research. Another 116 words (8 lines of text) covering the years 1505 and 1565 are included under the topic Early Rodas History in all our PDF Extended History products and printed products wherever possible.

Spelling variations of this family name include: Roda, Rota, Roa, Ruedas and others.

In the United States, the name Rodas is the 7,131st most popular surname with an estimated 4,974 people with that name. [1]

Rodas migration to the United States +

Rodas Settlers in United States in the 19th Century