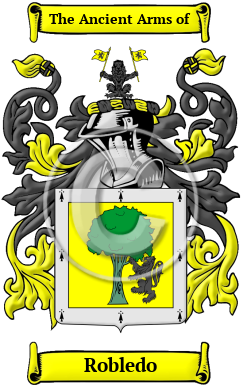 The distinguished surname Robledo is a proud sign of a rich and ancient ancestry. The original bearer of the name Robledo, which is a local surname, once lived, held land, or was born in the beautiful region of Spain. In Spain, hereditary surnames were adopted according to fairly general rules and, during the late Middle Ages, names that were derived from localities became increasingly widespread. Local names originally denoted the proprietorship of the village or estate. The Robledo family originally lived in the village named Robles, which was located in the judicial district of Murias in the province of Leon. This place-name was originally derived from the Spanish word robles, which means oak, and it indicates that the originally bearer of this name resided near oak trees.

Early Origins of the Robledo family

The surname Robledo was first found in Castile, in north central Spain.

Early History of the Robledo family

This web page shows only a small excerpt of our Robledo research. Another 97 words (7 lines of text) covering the years 1181, 1527, 1585 and 1857 are included under the topic Early Robledo History in all our PDF Extended History products and printed products wherever possible.

Notable bearers of the family name Robledo were Caspar de Robles or Gaspard di Robles (1527-1585), also known as Billy in Artois, Stadholder of Friesland and Groningen at the beginning of the Eighty Years' War; sixteenth century Spanish theologian Juan Robles; Agustín de Robles, seventeenth century Governor of Río de...
Another 50 words (4 lines of text) are included under the topic Early Robledo Notables in all our PDF Extended History products and printed products wherever possible.

In the United States, the name Robledo is the 4,842nd most popular surname with an estimated 4,974 people with that name. [1]

Robledo migration to the United States +

Robledo Settlers in United States in the 16th Century

Robledo Settlers in United States in the 19th Century