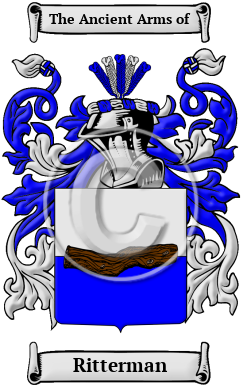 The Ritterman surname is derived from the Middle High German word "rîter," which means "horseback rider" or "knight." It is thus likely that the first people to adopt this as a surname were either knights or descendants of knights.

Early Origins of the Ritterman family

The surname Ritterman was first found in Austria, where this family name became a prominent contributor to the development of the district from ancient times. Always prominent in social affairs, the name became an integral part of that turbulent region as it emerged to form alliances with other families within the Feudal System and the nation.

Early History of the Ritterman family

One can encounter great variation in the spelling of surnames: in early times, spelling in general, and thus the spelling of names was not yet standardized; and later, spellings would change with branching and movement of families. Variations of the name Ritterman include Ritter, Ritther, Rytter, Ryther, Ridder, Rider, Rhitter and many more.

During this period prominent bearers of the name Ritterman were Christian Ritter (c. 1645-1725?), German composer and organist of the North German organ school; Heinrich Ritter (1791-1869), who was a German historian of philosophy born in Zerbst. He taught at Goettingen for thirty years. Karl...
Another 45 words (3 lines of text) are included under the topic Early Ritterman Notables in all our PDF Extended History products and printed products wherever possible.

Migration of the Ritterman family

After the First World War, Austria became a republic. The Treaty of Versailles broke up the empire in 1919 and many of the Sudeten Germans were incorporated into the new nation of Czechoslovakia. In the 20th century, many Austrians migrated to other parts of Germany or Europe, as well as to North America. In the United States, the majority of settlers landed in Philadelphia, and moved on to Ohio, Texas, Illinois, California, New York, and Maryland. Many German settlers also migrated to Canada, particularly Ontario and the Prairies. Amongst the settlers in North America with this distinguished name Ritterman were Hans M. Rider, who sailed to Philadelphia in 1728. Among the several hundred immigrants who followed this first settler were: Hans Ritter, who sailed to Philadelphia in 1731.