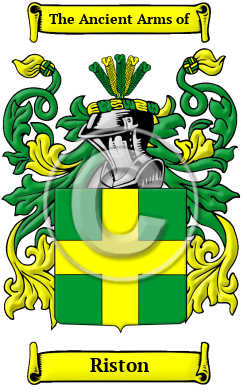 Early Origins of the Riston family

The surname Riston was first found in Norfolk at Castle Rising, a village and civil parish that dates back to the Domesday Book of 1086 where it was listed as Risinga and was held at that time by William de Warenne and the Bishop of Bayeux. [1] Records of 1254, list the place name as Castel Risinge and probably meant "settlement of the family or followers of a man called Risa," from the Old English personal name + ingas. The later addition of "castel" which evolved to "castle" was derived from the Norman castle that was located there. [2] In 1332, Isabella of France retired to Castle Rising castle following a coup d'état by her son King Edward III. The castle is now a ruined medieval fortification and was built soon after 1138 by William d'Aubigny II.

Early History of the Riston family

This web page shows only a small excerpt of our Riston research. Another 163 words (12 lines of text) covering the years 1227, 1306 and 1327 are included under the topic Early Riston History in all our PDF Extended History products and printed products wherever possible.

More information is included under the topic Early Riston Notables in all our PDF Extended History products and printed products wherever possible.

Riston migration to the United States +

Riston Settlers in United States in the 17th Century

Riston Settlers in United States in the 19th Century

Riston Settlers in Australia in the 19th Century

Historic Events for the Riston family +