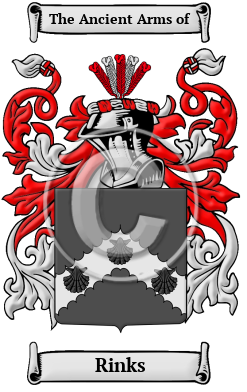 Early Origins of the Rinks family

The surname Rinks was first found in Norfolk where conjecturally, the surname is descended from the tenant of the lands of Ringstead, held by Norman noble Roger de Evreux as an under tenant also at Great Bircham and Old Buckenham in that same county who was recorded in the Domesday Book census of 1086. Roger held from William de Scohies who was tenant in chief. Roger was the son of Comte de Evreux, who was the son of Richard 1, Duke of Normandy.

Roger Ringstead (died 1366), was Bishop of Bangor, perhaps a native of Ringstead in Norfolk, educated at Cambridge, where he became doctor and professor of theology. [1]

Early History of the Rinks family

This web page shows only a small excerpt of our Rinks research. Another 69 words (5 lines of text) covering the years 1210, 1299 and 1284 are included under the topic Early Rinks History in all our PDF Extended History products and printed products wherever possible.

Spelling variations of this family name include: Ringstead, Ringsted, Ring, Wring and others.

More information is included under the topic Early Rinks Notables in all our PDF Extended History products and printed products wherever possible.

Migration of the Rinks family