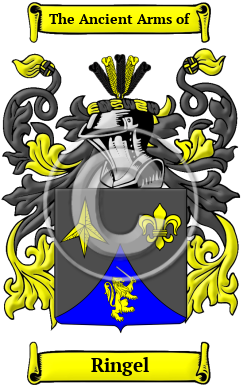 Early Origins of the Ringel family

The surname Ringel was first found in Westphalia, where chronicles record them as early as the year 1000. There they were closely identified in the mediaeval period with the feudal society of the northern regions, and would later emerge as a noble family with great influence, having many distinguished branches, and become noted for its involvement in social, economic and political affairs. Chronicles first mention Diderich Wrange of Cologne in Westphalia around the year 1135. Chronicles also mention Johann Wrangere of Hamburg as early as 1252.

Early History of the Ringel family

Notables of the period with the name Ringel were members of the Wrangel military family who served in the Swedish, Russian, and Prussian forces. Friedrich Heinrich Wrangel (1784-1877) was a Prussian general field marshal...
Another 33 words (2 lines of text) are included under the topic Early Ringel Notables in all our PDF Extended History products and printed products wherever possible.

Ringel migration to the United States +

Ringel Settlers in United States in the 18th Century

Ringel Settlers in United States in the 19th Century