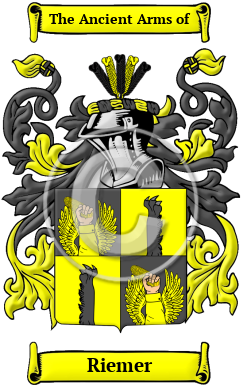 Early Origins of the Riemer family

The surname Riemer was first found in Austria, where this family name became a prominent contributor to the development of the district from ancient times. Chronicles first mention Johann Reimers of Bremen in 1293, Nokel Reimar of Eger, Bohemia, in 1350, and Hensl Raimer of Olmuetz. The oldest form of the name is "Reinmar" or "Reginmar," which meant literally "famous councillor." Always prominent in social affairs, the name became an integral part of that turbulent region as it emerged to form alliances with other families within the Feudal System and the nation.

Early History of the Riemer family

This web page shows only a small excerpt of our Riemer research. Another 182 words (13 lines of text) covering the years 1710, 1738, 1694, 1768, 1200 and 1260 are included under the topic Early Riemer History in all our PDF Extended History products and printed products wherever possible.

During this period prominent bearers of the name Riemer were Herman Samuel Reimarus (1694-1768), a famous Hebrew scholar and Bible scholar, whose house in Hamburg was the centre of the highest culture. He founded many learned and artistic societies which had an enormous impact on the cultural life of Hamburg. His name was the Latin...
Another 54 words (4 lines of text) are included under the topic Early Riemer Notables in all our PDF Extended History products and printed products wherever possible.

In the United States, the name Riemer is the 13,173rd most popular surname with an estimated 2,487 people with that name. [1]

Riemer migration to the United States +

Riemer Settlers in United States in the 18th Century

Riemer Settlers in United States in the 19th Century