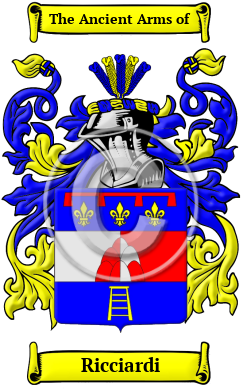 The Ricciardi surname comes from the personal (first) name Riccardo, which is the Italian cognate of Richard.

Early Origins of the Ricciardi family

The surname Ricciardi was first found in Sardinia (Italian: Sardegna, Sardinian: Sardigna), the second largest island in the Mediterranean Sea. The original inhabitants were Sicels. The Greeks colonized the island in 735 B.C. and Phoenician settlements began in 6th century. The Carthaginians arrived in 410, followed by the Romans. After the decline of Rome, the island was under the power of the Saracens. Then in 1057, Sicily was conquered by the Normans. The time of conquest is said to be Sicily's brightest hour, having made the Sicilians the leading Maritime power in the Mediterranean and King Roger of Sicily one of Europe's greatest kings. In those ancient times only persons of rank, the podesta, clergy, city officials, army officers, artists, landowners were entered into the records. To be recorded at this time, at the beginning of recorded history, was of itself a great distinction and indicative of noble ancestry.

Early History of the Ricciardi family

This web page shows only a small excerpt of our Ricciardi research. Another 102 words (7 lines of text) covering the years 1368, 1449, 1585, 1639, and 1833 are included under the topic Early Ricciardi History in all our PDF Extended History products and printed products wherever possible.

More information is included under the topic Early Ricciardi Notables in all our PDF Extended History products and printed products wherever possible.

In the United States, the name Ricciardi is the 8,108th most popular surname with an estimated 2,487 people with that name. [1]

Ricciardi migration to the United States +

Ricciardi Settlers in United States in the 19th Century

Ricciardi Settlers in United States in the 20th Century