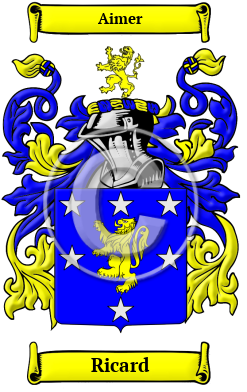 The history of the name Ricard goes back the Medieval period to a region known as Brittany (French: Bretagne). Such a French name was given to a person known for his bravery. The name Richard is derived from the Germanic personal name of Richard, which is composed of the elements "ric", meaning "powerful", and "hard", meaning "brave" or "strong".

Early Origins of the Ricard family

The surname Ricard was first found in Brittany where they held a family seat in the honour of Kerjean, a seigneurie which would ultimately become noblesse as Barons of the Empire.

By the 15th century many of the family name had branched eastward to Lorraine, where the name seemed to become most prolific. Meanwhile, they also emerged in other locations throughout France including Aboncourt in Lorraine, Dauphine, Bressel in Neufchatel, Pichon in île-de-France, Prade in Lyonnais, Vaux in Roannais, Ruffey in Bourgogne, Pontreau in Berry, in Brittany at Pervenchere, Primaudaye, and in Coetaufao. François Richard was a French industrialist who died in 1839.

Marin Richard, son of Jean and Guillemette (née Bertin), is recorded as one of the first members of the Richard family to come to New France in the 17th century. He is viewed as the primary ancestor for the Richard families in Canada. Marin eventually settled at Saint-Charles-des-Grandines and married Marie-Madeleine Grandjean, daughter of Philippe and Claude (née Argentiere), in Quebec on 21st October 1669. [1]

Early History of the Ricard family

This web page shows only a small excerpt of our Ricard research. More information is included under the topic Early Ricard History in all our PDF Extended History products and printed products wherever possible.

One can encounter great variation in the spelling of French surnames; in part, as spelling, and the spelling names was not yet standardized during the early development of the written French language. Later, there was much branching and movement of families, and spellings would change according to region. Variations of the name Ricard include Richard, Richeau, de Richard, De Richard, de la Richard, Richaud, Richart and many more.

Another 29 words (2 lines of text) are included under the topic Early Ricard Notables in all our PDF Extended History products and printed products wherever possible.

Ricard migration to the United States +

Migration from France to New France or Quebec as it was now more popularly called, continued from France until it fell in 1759. By 1675, there were 7000 French in Quebec. By the same year the Acadian presence in Nova Scotia, New Brunswick and Prince Edward Island had reached 500. In the treaty of Utrecht, the Acadians were ceded by France to Britain in 1713. In 1755, 10,000 French Acadians refused to take an oath of allegiance to England and were deported. They found refuge in Louisiana. In 1793, the remaining French in these provinces came under British rule. Meanwhile, in Quebec, the French race flourished, founding in Lower Canada, one of the two great solitudes which became Canada. Many of this distinguished family name Ricard were prominent in social, cultural, religious and political affairs in France and New France. Amongst the settlers in North America with this distinguished name Ricard were

Ricard Settlers in United States in the 17th Century

Ricard Settlers in United States in the 18th Century

Ricard Settlers in United States in the 19th Century

Ricard Settlers in United States in the 20th Century

Ricard Settlers in Canada in the 17th Century

Ricard Settlers in Canada in the 18th Century