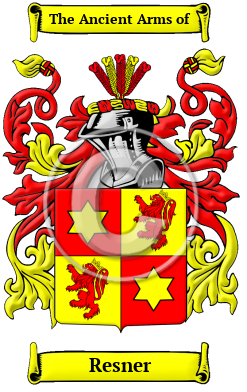 Bavaria, Germany is the ancestral home of the Resner family. The Germans began using hereditary surnames in the 12th century. Resner is an occupational name, which was derived from the kind of work done by the original bearer. It is a name for a wood carver. Checking further we found the name was derived from the medieval German word ris or risle, which means branch or twig. Furthermore, there are numerous places in Germany named Reisen. There is a town called Reisen in Bavaria and a town Reissen in Thuringia.

Early Origins of the Resner family

The surname Resner was first found in Bavaria, where the name became noted for its many branches within the region, each house acquiring a status and influence which was envied and enrolled by the princes of the region. The name may have its origin, or the family may have lent its name to the town Reisen in Bavaria and the town Reissen in Thuringia. Chronicles first mention Hanke von Reysen of Glatz in 1348, and the name Reisner is found in 1348 in Bruenn, 1386 in Kolion, and 1383 in Wuerzburg. The variation Reyssener is found in Freiberg as early as 1465. In their later history the various branches became a powers unto themselves and were elevated to the ranks of nobility as their influence grew.

Early History of the Resner family

Many cultural groups lived in the German states in medieval times. Each had its own dialect and traditions, and unique variations of popular names. Low German, which is similar to contemporary Dutch, was spoken in Westphalia. German names are characterized by additions such as regional suffixes and phrases that tell something about the origin or background of its original bearer. Further contributing to the variation in German names was the fact that there were no spelling rules in medieval times: scribes recorded names according to their sound. The recorded spelling variations of Resner include Reisner, Reisener, Reissner, Reissener, Reisne, Reisen, Reissen, Reissne, Reysner, Reyssner, Reysener, Reyssener, Risener and many more.

Prominent among members of the name Resner in this period include Friedrich Risner (c.1533-1580), German mathematician, the first to propose the idea of a portable camera obscura; Lieutenant Field-Marshal Reisner, who was awarded the title of Baron in 1816 for his 40 years of outstanding service in the artillery divisions in Vienna. The variation Reissen was represented by a family that came from...
Another 62 words (4 lines of text) are included under the topic Early Resner Notables in all our PDF Extended History products and printed products wherever possible.

Migration of the Resner family

European migration to North America began in the mid-17th century and continued unabated until the mid-20th. Many Bavarians made the long trip to escape poverty or persecution based on their religious beliefs. The chance for tenant farmers to own their own land was also a major drawing card. They settled all across the United States in Pennsylvania, Texas, New York, Illinois, and California. Many came to Canada also, settling in Ontario and the prairie provinces. Analysis of immigration records has shown some of the first Resners to arrive in North America, and among them were: Hans Michel Reisner, who sailed to Philadelphia in 1732; Wilhelm Reysner, who sailed to Philadelphia in 1738; Michel Reisener, whose Oath of Allegiance was recorded in Pennsylvania in 1749.