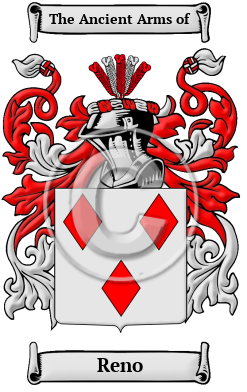 The surname Reno is a local name, derived from the Rhine River. The Rhine starts in Basel, Switzerland, and bends north through the German countryside until it reaches the North Sea, passing through the cities of Freiburg, Frankfurt, Bonn, and Cologne. Local names are based upon the place where the original bearer lived or held land.

Early Origins of the Reno family

The surname Reno was first found in Switzerland, where this family name became a prominent contributor to the development of the district from ancient times. Always prominent in social affairs, the name became an integral part of that turbulent region as they emerged to form alliances with other families within the Feudal System and the nation.

Early History of the Reno family

Notables of the time with the surname Reno were Amadeus Rhein, who was the Grand Prior of the Johannite Order of Knights in 1408. Caspar Rhein was the Bishop of Basel until 1502. Both these men were of the Rhein von und zu Rhein family. Also of this eminent line...
Another 50 words (4 lines of text) are included under the topic Early Reno Notables in all our PDF Extended History products and printed products wherever possible.

In the United States, the name Reno is the 3,892nd most popular surname with an estimated 7,461 people with that name. [1]

Reno migration to the United States +

Reno Settlers in United States in the 18th Century

Reno Settlers in United States in the 19th Century

Reno Settlers in United States in the 20th Century