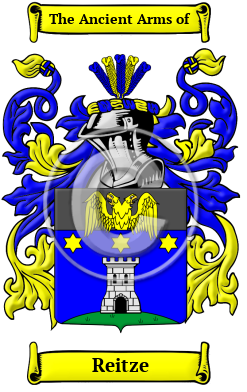 Early Origins of the Reitze family

The surname Reitze was first found in Austria, where the name Reitze became noted for its many branches in the region, each house acquiring a status and influence which was envied by the princes of the region. In their later history, bearers of the name became a power unto themselves and were elevated to the ranks of nobility as they grew into this most influential family. The origin of the name is very uncertain. The most likely possibility is that it is taken from a place in Pommerania and that then the family migrated south to Austria. It could also be taken from a shortened form of the personal names Ragizo, Raginhart or Reginbrandt. A third possibility is that Reitze is a variation of another surname, such as Reis. The family is so wide-spread that likely more than one of these possibilities is true and that several different families of the same name arose in different areas of Germany.

Early History of the Reitze family

This web page shows only a small excerpt of our Reitze research. Another 71 words (5 lines of text) are included under the topic Early Reitze History in all our PDF Extended History products and printed products wherever possible.

Spelling variations of this family name include: Reitz, Reits, Reitzel, Reizo and others.

More information is included under the topic Early Reitze Notables in all our PDF Extended History products and printed products wherever possible.

Reitze migration to the United States +

Reitze Settlers in United States in the 18th Century

Reitze Settlers in United States in the 19th Century