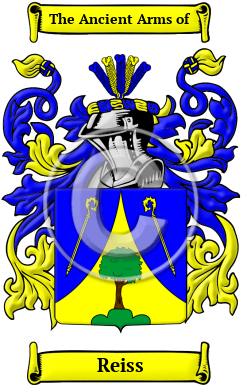 The origin of the proud surname Reiss can be traced to the historic kingdom of Bohemia, which is now part of the Czech Republic. In the Middle Ages, many of the Bohemians were a part of the Holy Roman Empire, which was characterized by the Feudal System. Before this era, people were known only by a single name. However, as the population increased and travel became more prevalent, it became necessary for people to adopt a second name to identify themselves. Many people, such as the Reiss family, adopted the name of their feudal occupation as their surname. The name goes back to the mediaeval German "ris" or "risle," which meant literally "branch" or "twig,"and the surname was an occupational name for a wood carver.

Early Origins of the Reiss family

The surname Reiss was first found in Bohemia, where the name came from humble beginnings but gained a significant reputation for its contribution to the emerging mediaeval society. They later became more prominent as many branches of the same house acquired distant estates and branches, some in foreign countries, always elevating their social status by their great contributions to society. Chronicles first mention Clesse Reysse of Mainz in 1444, and Leonhart Reiser of Nuremberg in 1443. The name goes back to the mediaeval German "ris" or "risle," which meant literally "branch" or "twig." Reisser could also refer to a wood carver.

Early History of the Reiss family

This web page shows only a small excerpt of our Reiss research. Another 140 words (10 lines of text) covering the years 1505, 1606, 1645, 1870, and 1897 are included under the topic Early Reiss History in all our PDF Extended History products and printed products wherever possible.

Another 44 words (3 lines of text) are included under the topic Early Reiss Notables in all our PDF Extended History products and printed products wherever possible.

In the United States, the name Reiss is the 4,956th most popular surname with an estimated 4,974 people with that name. [1]

Reiss migration to the United States +

Reiss Settlers in United States in the 18th Century

Reiss Settlers in United States in the 19th Century

Reiss Settlers in United States in the 20th Century

Reiss Settlers in Australia in the 19th Century