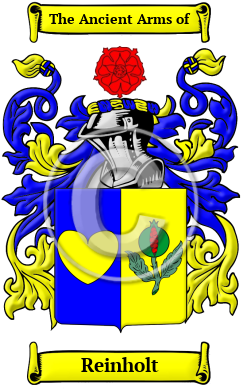 Early Origins of the Reinholt family

The surname Reinholt was first found in Saxony, where the name emerged in mediaeval times as one of the notable families of the region. Chronilces first mention meister Reynolt of Stralsburg in 1303 and Ernst Reinolt of Glatz in 1532. The oldest form of the name is "Reginold," which meant literally "clever in council." The ending -old changed to -hold during the 16th century. From the 13th century the surname was identified with the great social and economic evolution which made this territory a landmark contributor to the development of the nation.

Early History of the Reinholt family

Prominent bearers of the family name Reinholt at this time were Erasmus Reinhold (1511-1553), German astronomer and mathematician, eponym of the lunar crater. Thomas Reinhold (1690-1751), was a German singer, son of the Archbishop of Dresden and his son, Charles Frederick...
Another 40 words (3 lines of text) are included under the topic Early Reinholt Notables in all our PDF Extended History products and printed products wherever possible.

Reinholt migration to the United States +

Reinholt Settlers in United States in the 19th Century