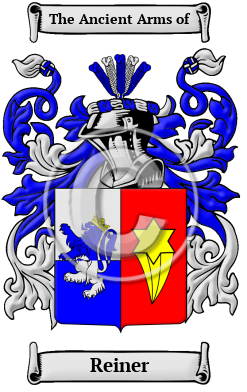 Bavaria, Germany is the original homeland of the Reiner family. Reiner is a patronymic name, a type of surname that derived from the given name of the father of the original bearer. Reiner was derived from the Old Germanic personal name Raginhari, which is composed of the Old German elements ragin, which means counsel, and hard, which means hardy.

Early Origins of the Reiner family

The surname Reiner was first found in Bavaria, where the name became noted for its many branches within the region, each house acquiring a status and influence which was envied and enrolled by the princes of the region. Chronicles first mention Reinerus Reynberti of Rostolk around 1280. The Latin "Renerus" also became "Reinher" from which "Reinhard" was formed. In their later history the Reiners became a power unto themselves and were elevated to the ranks of nobility as they grew into this most influential family.

Early History of the Reiner family

This web page shows only a small excerpt of our Reiner research. Another 89 words (6 lines of text) covering the years 1728, 1606, 1647 and 1728 are included under the topic Early Reiner History in all our PDF Extended History products and printed products wherever possible.

In the medieval era, many different cultural groups lived in the German states. There are thus many regional variations of German surnames from that era. Westphalians spoke Low German, which is similar to modern Dutch. Many German names carry suffixes that identify where they came from. Others have phrases attached that identify something about the original bearer. Other variations in German names resulted from the fact that medieval scribes worked without the aid of any spelling rules. The spelling variations of the name Reiner include Reiner, Reine, Reinere, Rhiner, Reiners, Rainer, Rainers, Rainert, Rainere, Renerus (Latin) and many more.

Prominent among members of the name Reiner in this period include Vincentio (Vincenzio, Vincenzo) Reinieri (Renieri, Reiner) (1606-1647), an Italian mathematician and astronomer, close friend and disciple of...
Another 28 words (2 lines of text) are included under the topic Early Reiner Notables in all our PDF Extended History products and printed products wherever possible.

In the United States, the name Reiner is the 8,358th most popular surname with an estimated 2,487 people with that name. [1]

Reiner migration to the United States +

European migration to North America began in the mid-17th century and continued unabated until the mid-20th. Many Bavarians made the long trip to escape poverty or persecution based on their religious beliefs. The chance for tenant farmers to own their own land was also a major drawing card. They settled all across the United States in Pennsylvania, Texas, New York, Illinois, and California. Many came to Canada also, settling in Ontario and the prairie provinces. Analysis of immigration records has shown some of the first Reiners to arrive in North America, and among them were:

Reiner Settlers in United States in the 18th Century

Reiner Settlers in United States in the 19th Century

Reiner Settlers in United States in the 20th Century

Historic Events for the Reiner family +

Suggested Readings for the name Reiner +