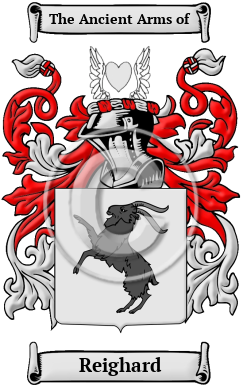 The surname Reighard is a Bavarian nickname surname. German nicknames came from eke-names, or added names, and tended to describe a physical characteristic or other attribute of their initial bearer. Reighard is a name for a brave or strong person. It is a common name among the English, French, and Flemish/Dutch communities, as well as the German, and stems from the words ric, meaning power, and hard, meaning hardy or strong.

Early Origins of the Reighard family

The surname Reighard was first found in Bavaria, where the name became noted for its many branches within the region, each house acquiring a status and influence which was envied and enrolled by the princes of the region. The literal meaning of the name is "brave ruler," and chronicles first mention Hantsch Richard of Liegnitz in 1381, and Hans Reichart of Friedland in 1381. In their later history the name became a power unto themselves and were elevated to the ranks of nobility as they grew into this most influential family.

Early History of the Reighard family

This web page shows only a small excerpt of our Reighard research. Another 160 words (11 lines of text) covering the years 1560, 1733, 1749, 1752, and 1814 are included under the topic Early Reighard History in all our PDF Extended History products and printed products wherever possible.

Many cultural groups lived in the German states in medieval times. Each had its own dialect and traditions, and unique variations of popular names. Low German, which is similar to contemporary Dutch, was spoken in Westphalia. German names are characterized by additions such as regional suffixes and phrases that tell something about the origin or background of its original bearer. Further contributing to the variation in German names was the fact that there were no spelling rules in medieval times: scribes recorded names according to their sound. The recorded spelling variations of Reighard include Reichhard, Reichhart, Reichard, Reichart, Reichardt, Reickhard, Reichheart, Reikhard, Reickhart, Richard, Reichert and many more.

Prominent among members of the name Reighard in this period include Johann Friedrich Reichardt (1752-1814), who was the court composer and conductor to Frederick the Great and Frederick II, and...
Another 29 words (2 lines of text) are included under the topic Early Reighard Notables in all our PDF Extended History products and printed products wherever possible.

Migration of the Reighard family

Between the mid-17th and mid-20th centuries, German settlers arrived in North America by the thousands. Persecution based on religion and poverty were great motivators in this large-scale migration. So too was the opportunity for tenant farmers to own their own land. Ample land and opportunity awaited the settlers who went to such states as Pennsylvania, Texas, New York, Illinois, and California, as well as Ontario and the prairie provinces of Canada. Research into the origins of individual families in North America revealed records of the immigration of a number of people bearing the name Reighard or a variant listed above: Joseph Reichardt, who sailed to New York in 1709. Among the many other immigrants to follow this first settler were: Reinhart Reichart, who sailed to Philadelphia in 1732.