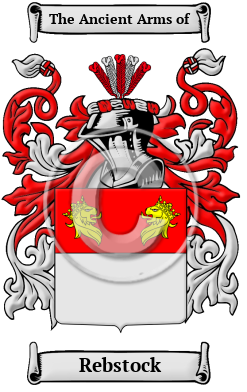 The surname Rebstock is a German occupational surname that evolved in the region known as the Rhineland. Germans at first used only one name, but population growth and increased travel in medieval times caused confusion between people of the same name, forcing the people to adopt hereditary surnames. These names often identified people by the kind of work they did. Rebstock is a name for a person who worked as a wine maker and a grower of grapes. The surname Rebstock is an occupational name that was originally derived from the common trades of the medieval era which transcended European cultural and linguistic boundaries.

Early Origins of the Rebstock family

The surname Rebstock was first found in the Upper Rineland, where this family name became a prominent contributor to the development of the district from ancient times. Literally, the name refers to the owner of a vineyard, and "Rebstock" was probably the earliest form before it was shortened to "Rebmann" and then "Reber." Always prominent in social affairs, the name became an integral part of that turbulent region as it emerged to form alliances with other families within the Feudal System and the nation.

Early History of the Rebstock family

In the medieval era, many different cultural groups lived in the German states. There are thus many regional variations of German surnames from that era. Westphalians spoke Low German, which is similar to modern Dutch. Many German names carry suffixes that identify where they came from. Others have phrases attached that identify something about the original bearer. Other variations in German names resulted from the fact that medieval scribes worked without the aid of any spelling rules. The spelling variations of the name Rebstock include Rebstock, Rebenstock, Rebestock, Rebstocke, Reber, Rebmann and many more.

More information is included under the topic Early Rebstock Notables in all our PDF Extended History products and printed products wherever possible.

Rebstock migration to the United States +

The great European flow of migration to North America, which began in the middle of the 17th century and continued into the 20th century, was particularly attractive to those from the Rhineland who wished to escape either poverty or religious persecution. Many of those who left the Rhineland to seek their fortunes in the prosperous and free New World settled in the major urban centers of the United States and Canada. In the United States, the settlers from the Rhineland passed through immigration centers like that of Ellis Island, most of them moving on to Pennsylvania, Ohio, Texas, Illinois, California, and New York. In Canada, the majority of Rhinelanders settled in Ontario and the prairie provinces. An examination of passenger and immigration lists has revealed many important settlers to North America bearing the name Rebstock, or one of its variants above:

Rebstock Settlers in United States in the 18th Century

Rebstock Settlers in United States in the 19th Century

Rebstock Settlers in Canada in the 18th Century