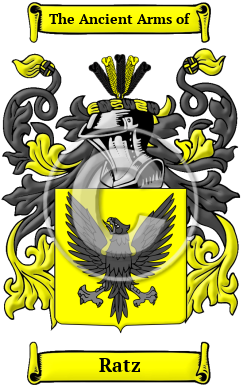 The name Ratz was derived from one of several place names in the German empire, such as Rasch near Nuremberg or Raschau in Saxony. The surname most likely emerged independently in several different kingdoms before it began to branch to still more regions.

Early Origins of the Ratz family

The surname Ratz was first found in Pomerania, where the name could be considered to have made a great early contribution to the feudal society which became the backbone of modern Europe. Chronicles first mention Johann Rasche of Stralsund, Pomerania, in 1277, Ruel Rascher of Frankfurt in 1300, and Cunrath Rasch of Allgae, Pomerania in 1361. The name became prominent in local affairs and branched into many houses which played important roles in the tribal and national conflicts at a time when groups sought power and status in an ever changing territorial profile.

Early History of the Ratz family

This web page shows only a small excerpt of our Ratz research. Another 161 words (12 lines of text) covering the year 1645 is included under the topic Early Ratz History in all our PDF Extended History products and printed products wherever possible.

Another 34 words (2 lines of text) are included under the topic Early Ratz Notables in all our PDF Extended History products and printed products wherever possible.

Ratz migration to the United States +

Ratz Settlers in United States in the 18th Century

Ratz Settlers in United States in the 19th Century

Ratz Settlers in United States in the 20th Century