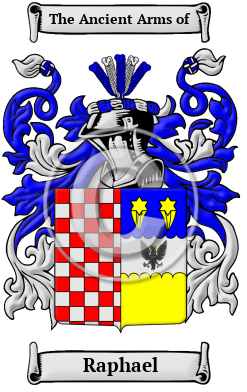 Early Origins of the Raphael family

The surname Raphael was first found in Lucca, a city and comune in Tuscany, capital of the province of Lucca and where Bascilican type churches abound. The history commences in 218 B.C., and passed through many hands in the intervening centuries. Many notable scholars and prelates lived here. The cathedral of St Martin was begun in 1060 by Bishop Anselm, later Pope Alexander II. It has many museums and galleries. In those ancient times only persons of rank, the podesta, clergy, city officials, army officers, artists, landowners were entered into the records. To be recorded at this time, at the beginning of recorded history, was of itself a great distinction and indicative of noble ancestry.

Early History of the Raphael family

This web page shows only a small excerpt of our Raphael research. Another 137 words (10 lines of text) covering the years 1220, 1263, and 1535 are included under the topic Early Raphael History in all our PDF Extended History products and printed products wherever possible.

More information is included under the topic Early Raphael Notables in all our PDF Extended History products and printed products wherever possible.

In the United States, the name Raphael is the 8,619th most popular surname with an estimated 2,487 people with that name. [1]

Raphael migration to the United States +

Raphael Settlers in United States in the 18th Century

Raphael Settlers in United States in the 19th Century

Raphael Settlers in Australia in the 19th Century

Raphael Settlers in New Zealand in the 19th Century