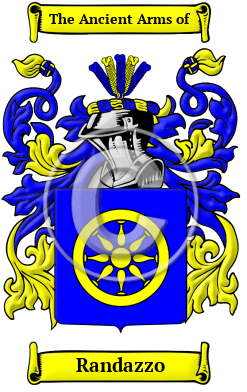 Early Origins of the Randazzo family

The surname Randazzo was first found in Sicily (Italian: Sicilia), the largest island in the Mediterranean Sea, and places near the city of Randazzo in particular, since this name is taken from the name of that city. The name is actually rather infrequently seen in the city itself however, since the name was given to people who originated from Randazzo then moved elsewhere. Names like this one, taken from the original home town or city of the family were fairly common in most countries, though rarer in Italy.

Early History of the Randazzo family

This web page shows only a small excerpt of our Randazzo research. Another 64 words (5 lines of text) covering the years 134 and 1345 are included under the topic Early Randazzo History in all our PDF Extended History products and printed products wherever possible.

Spelling variations of this family name include: Randazzo, di Randazzo, de Randazzo, Randazzi and many more.

More information is included under the topic Early Randazzo Notables in all our PDF Extended History products and printed products wherever possible.

In the United States, the name Randazzo is the 6,472nd most popular surname with an estimated 4,974 people with that name. [1]

Randazzo migration to the United States +

Randazzo Settlers in United States in the 19th Century

Randazzo Settlers in United States in the 20th Century