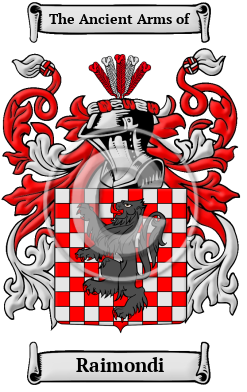 The distinguished surname Raimondi can be traced back to the ancient and beautiful region of Venice. Although people were originally known only by a single name, it became necessary for people to adopt a second name to identify themselves as populations grew and travel became more frequent. The process of adopting fixed hereditary surnames was not complete until the modern era, but the use of hereditary family names in Italy began in the 10th and 11th centuries. Italian hereditary surnames were developed according to fairly general principles and they were characterized by a profusion of derivatives coined from given names. The most common type of family name found in the region of Venice is the patronymic surname, which is derived from the father's given name. During the Middle Ages, Italians adopted the patronymic system of name-making because it perfectly complemented the prevailing Feudal System. In Italy the popularity of patronymic type of surname is also due to the fact that during the Christian era, people often named their children after saints and biblical figures. The surname Raimondi came from the personal name Raimondo, which is the Italian version of Raymond. This name is of Germanic origin and means "protector with the advice of the gods." When the Lombards, a Germanic tribe, invaded Italy, they accepted the language of the higher Latin civilization with which they had come into contact. For hundreds of years they retained the Teutonic names they had brought into the territories they occupied and succeeded in imposing them upon the people over whom they ruled.

Early Origins of the Raimondi family

The surname Raimondi was first found in Cremona a city in Lombardy, capital of the province of Cremona. Founded by the Romans in 218 it has a checkered history. Virgil studied here. The finest building is the cathedral in the Lombard Romanesque style. It was started in 1107. There are many frescos from the 16th century. It was Austrian in 1814, but became a part of Italy in 1859. In those ancient times only persons of rank, the podesta, clergy, city officials, army officers, artists, landowners were entered into the records. To be recorded at this time, at the beginning of recorded history, was of itself a great distinction and indicative of noble ancestry.

Early History of the Raimondi family

This web page shows only a small excerpt of our Raimondi research. Another 140 words (10 lines of text) covering the years 1587 and 1745 are included under the topic Early Raimondi History in all our PDF Extended History products and printed products wherever possible.

More information is included under the topic Early Raimondi Notables in all our PDF Extended History products and printed products wherever possible.

Raimondi migration to the United States +

Raimondi Settlers in United States in the 20th Century