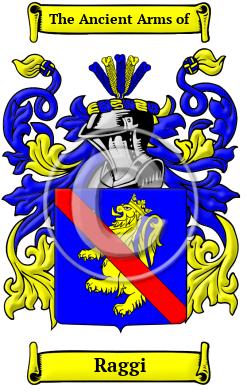 The Italian name Raggi derives from the term "raggio" which refers to "a beam or ray of light," such as the points of a star. It is supposed that Raggi was a nickname that later became a surname.

Early Origins of the Raggi family

Early History of the Raggi family

This web page shows only a small excerpt of our Raggi research. More information is included under the topic Early Raggi History in all our PDF Extended History products and printed products wherever possible.

Spelling variations of this family name include: Raggi, Raggio, Raggia, Raggiani, Raggiante and many more.

Prominent bearers of the Raggi surname in this era include Cardinal Lorenzo Raggi (1615-1687), of the senatorial family from Genoa, who was made a Cardinal in 1647, and was "Chiesa Legato di Romagna" or Church legate of the Romagna region from 1676-1686; Octaviano Raggi (1592-1643) of Genoa, created...
Another 48 words (3 lines of text) are included under the topic Early Raggi Notables in all our PDF Extended History products and printed products wherever possible.

Migration of the Raggi family

Some of the first settlers of this family name or some of its variants were: Barthelemew Raggio, who was naturalized in Mississippi in 1842; Geovani Raggio, whose Oath was recorded in Philadelphia in 1855; Andrea Raggi, age 30, who arrived in America on May. 11, 1891, aboard the &quot.