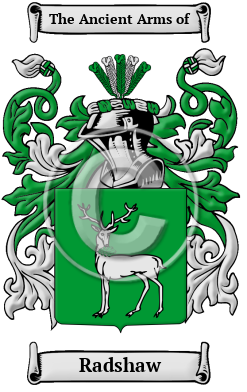 Early Origins of the Radshaw family

The surname Radshaw was first found in the West Riding of Yorkshire at Redshaw Gill in Blubberhouses, a township, in the parish of Fewston, Lower division of the wapentake of Claro. [1] A small village, the current population is less than 100, Redshaw Gill is now mostly parkland bordering on the river between the Fewston Reservoir and the Thruscross Reservoir. Slightly to the north lies Redshaw Hall, now a farmhouse.

One of the first records of the family was Nicholas de Redschaghe who held estates here in 1297. The Yorkshire Poll Tax Rolls of 1397 list John Redeshawe as also holding lands at that time. [2]

Early History of the Radshaw family

This web page shows only a small excerpt of our Radshaw research. Another 78 words (6 lines of text) covering the years 1465, 1575, 1712 and 1746 are included under the topic Early Radshaw History in all our PDF Extended History products and printed products wherever possible.

Radshaw has been spelled many different ways. Before English spelling became standardized over the last few hundred years, spelling variations in names were a common occurrence. As the English language changed in the Middle Ages, absorbing pieces of Latin and French, as well as other languages, the spelling of people's names also changed considerably, even over a single lifetime. Spelling variants included: Redshaw, Redshawe, Readshaw, Readshawe, Ridshaw, Radshaw, Radshawe, Readshore and many more.

More information is included under the topic Early Radshaw Notables in all our PDF Extended History products and printed products wherever possible.

Radshaw Settlers in Australia in the 19th Century