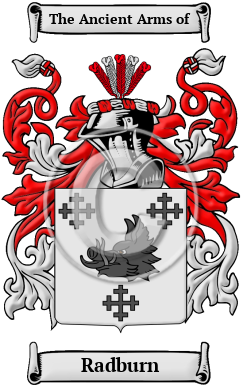 Early Origins of the Radburn family

The surname Radburn was first found in Huntingdonshire, a historic county in England, now part of the county of Cambridgeshire. The family name was first referenced in the year 1273 when John Redeborne held estates in this shire. Radbourne is a small village and civil parish in the English county of Derbyshire. [1]

Radbourne Hall is an 18th-century country house and now the home of the Chandos-Pole family. The hall has been held by the Chanods family since the Norman Conquest. Redbourn is a village and civil parish in Hertfordshire dating back to the Domesday Book of 1086 when it was first listed as Redborne. [2]

Early History of the Radburn family

Radburn has been spelled many different ways. Before English spelling became standardized over the last few hundred years, spelling variations in names were a common occurrence. As the English language changed in the Middle Ages, absorbing pieces of Latin and French, as well as other languages, the spelling of people's names also changed considerably, even over a single lifetime. Spelling variants included: Radborn, Radborne, Redborn, Redborne, Redbourne, Radbourne, Redeborn, Radeborne, Radebourne, Radburn, Redburn, Radbron and many more.

Distinguished members of the family include Thomas Rudborne or Rodeburne (died 1442), English divine, Bishop of St. Davids, probably a native of Rodbourne, Wiltshire. He was educated at Merton College, Oxford, where he was bursar 1399-1400, and was proctor of the university in 1399 and 1401. He was elected...
Another 49 words (4 lines of text) are included under the topic Early Radburn Notables in all our PDF Extended History products and printed products wherever possible.

Migration of the Radburn family

In an attempt to escape the chaos experienced in England, many English families boarded overcrowded and diseased ships sailing for the shores of North America and other British colonies. Those families hardy enough, and lucky enough, to make the passage intact were rewarded with land and a social environment less prone to religious and political persecution. Many of these families became important contributors to the young colonies in which they settled. Early immigration and passenger lists have documented some of the first Radburns to arrive on North American shores: Thomas Radborne, and John Radborn, bonded passengers, who came to America in 1754; Thomas Radbone, who arrived in New York, NY in 1820; and Joseph Radbourn, who arrived in Philadelphia in 1844..

Historic Events for the Radburn family +