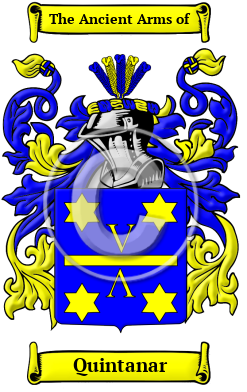 The surname Quintanar came from the name the word "quinto," from the Latin quintus, means "fifth. " The surname is of local origin, derived from one of the many places named Quinto in northern Italy.

Early Origins of the Quintanar family

The surname Quintanar was first found in the city of Rome, as early as the year 35 A.D. with Marcus Fabius Quintilianus, a rhetorician famous for his 12-book rhetoric.

Early History of the Quintanar family

This web page shows only a small excerpt of our Quintanar research. Another 62 words (4 lines of text) covering the years 1209, 1293 and 1581 are included under the topic Early Quintanar History in all our PDF Extended History products and printed products wherever possible.

Another 49 words (4 lines of text) are included under the topic Early Quintanar Notables in all our PDF Extended History products and printed products wherever possible.

In the United States, the name Quintanar is the 16,767th most popular surname with an estimated 2,487 people with that name. [1]

Migration of the Quintanar family