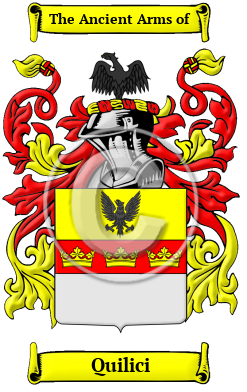 Early Origins of the Quilici family

The surname Quilici was first found in Calabria, a province at the southern tip of Italy which, though not on the island of Sicily was part of the Kingdom of Two Sicilies. The name is frequently found in other parts of the south of Italy, though some members of the family did move further north. Those that remained in the south kept the southern suffix "-o," while those that moved north adopted the northern convention of ending their name in "-i." Many surnames were taken from the occupation of the person who first took the name. This name is one such name, coming from the Italian word "chierico," meaning "altar boy."

Early History of the Quilici family

This web page shows only a small excerpt of our Quilici research. Another 62 words (4 lines of text) covering the years 1420 and 1797 are included under the topic Early Quilici History in all our PDF Extended History products and printed products wherever possible.

More information is included under the topic Early Quilici Notables in all our PDF Extended History products and printed products wherever possible.

Migration of the Quilici family

Some of the first settlers of this family name or some of its variants were: the $ family, who settled along the east coast of North America in the late 19th century. Giuseppe and Raffaele Chirico arrived in New York City in 1893 aboard a ship from Genoa Italy. In 1900.