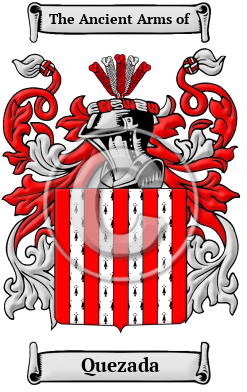 Early Origins of the Quezada family

The surname Quezada was first found in Andalucia, southern Spain, in the village named Quesada.

Early History of the Quezada family

Notable bearers of the family name Quezada Pere de Queralt (died 1408), a Catalan nobleman, diplomat, and poet, lord of Santa Coloma, one of the barons that revolted against John I at Calasança after having signed the sentence against Carroça de Vilaragut (1389), joined the rebels in order to advance his stepmother and sister-in-law, Lionor de Perellós, who was subsequently raised to Carroça's former position, participated in an expedition to Sicily (1392), after becoming a councillor and chamberlain of the king, he went on a diplomatic mission to Rome to participate in negotiations to resolve the Western Schism (1397), actively supported...
Another 115 words (8 lines of text) are included under the topic Early Quezada Notables in all our PDF Extended History products and printed products wherever possible.

In the United States, the name Quezada is the 2,466th most popular surname with an estimated 12,435 people with that name. [1]

Quezada migration to the United States +

Quezada Settlers in United States in the 19th Century

Quezada Settlers in United States in the 20th Century